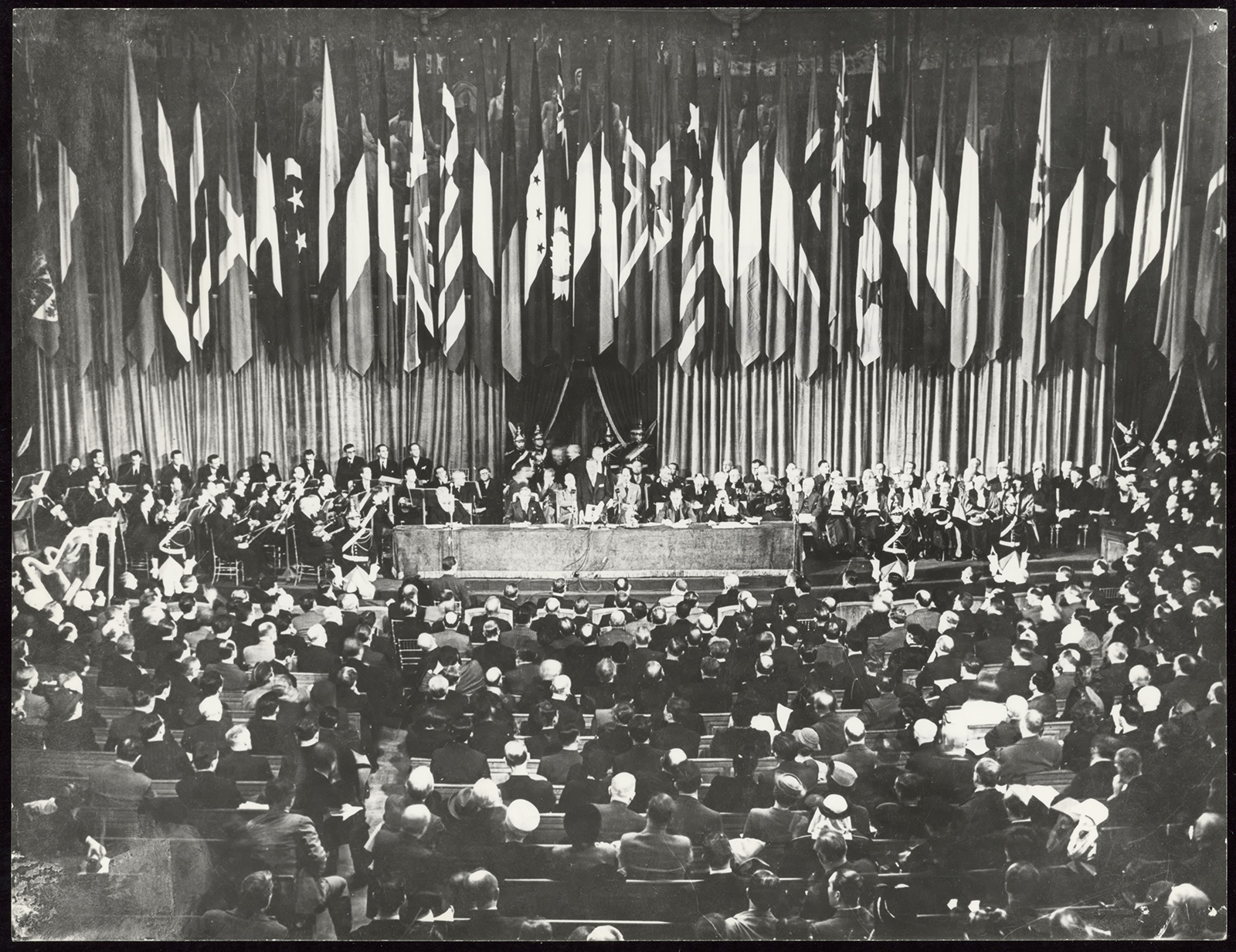 ‘ We were people from different continents, denominations, races, nations, and probably different political opinions. During our work we did not argue on these matters. We all tried merely to find the best expression for our common feelings and […] longings; and you, by your unanimous vote, have shown that mankind today is rich in constructive ideas, love, mutual understanding and courage.’
Dr. Bernard Drzewieski, Polish Delegation.

‘This moment is the beginning of our work.’ Archibald MacLeish, American Delegation.

The Conference for the Establishment of UNESCO met in London in November 1945. Delegates of 44 countries and eight intergovernmental bodies envisioned an organization that would embody a genuine culture of peace, one that must establish ‘a universal moral, social and political culture […] to ensure the triumph in the world of harmony, solidarity and peace.’
On 16 November 1945, the Final Act recognizing the UNESCO Constitution and the seat of the organization in Paris was accepted. With the 20th ratification of the Constitution by Greece on 4 November 1946, UNESCO legally came into being. The first General Conference organized by the Preparatory Commission opened on 20 November 1946. Julian Huxley was elected as UNESCO’s first Director-General and the Preparatory Commission continued as the first Secretariat of UNESCO. 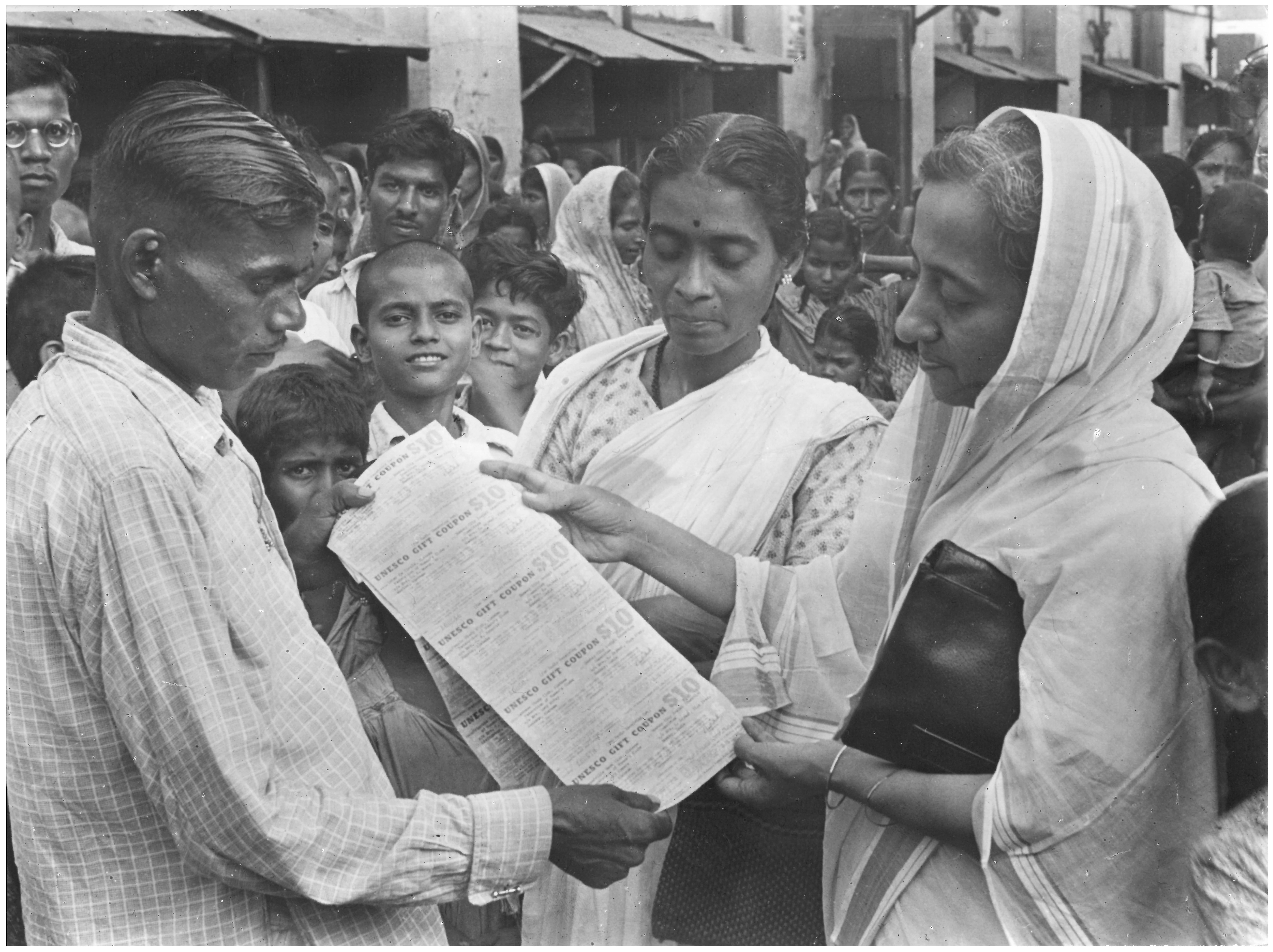 2/4
An international currency for peace
(1948–2005)
One of UNESCO’s earliest programmes was the UNESCO Gift Coupon scheme. It supported diverse projects benefitting individuals and groups such as community centres and universities. It connected complete strangers – donors and beneficiaries – across the globe.
UNESCO published lists of projects, such as a school in Sri Lanka  for blind children in need of supplies or a literacy project in Ghana requiring audiovisual equipment. Donor countries raised funds by selling UNESCO gift stamps. With money from the stamps, donors sent to beneficiaries UNESCO gift coupons, also known as UNUM (UN Unit of Money), which they used to purchase the necessary materials from participating sellers.
The programme had a significant impact. In the Republic of Korea, it is credited with regenerating the nation’s scientific and technical development from the 1960s to the 1990s. It enabled large-scale purchases of scientific equipment and literature at a time when foreign currencies and supplies were scarce.
Through the Gift Coupon scheme, UNESCO facilitated the inter-national exchange of cultural, scientific and educational goods. The programme ran from 1948 to 1975. In 1976, it became the UNESCO Co-Action programme, which ended in 2005.

3/4
The roots of UNESCO
(1926 – 1945)
UNESCO was founded on the ambition to construct the ‘intellectual and moral solidarity of mankind,’ in order to secure world peace and prevent the outbreak of another world war.
UNESCO inherited its mission in part from the International Institute of Intellectual Cooperation (IICI), founded in 1926 with funding from France. The IICI was the secretariat of the League of Nations’ International Committee on Intellectual Cooperation (CICI), which aimed to foster exchange amongst scientists, artists, teachers and intellectuals. It engaged personalities such as Marie Curie, Albert Einstein, Thomas Mann and Rabindranath Tagore. The IICI was inaugurated in 1926 at the Palais Royal, Paris, its seat until 1946, when UNESCO assumed its functions.
During World War II, the Conference of Allied Ministers of Education (CAME) convened Allied countries and governments-in-exile to plan for educational needs at war’s end. CAME proposed the idea for an international organization and drafted a Constitution and title for the organization: the United Nations Educational, Scientific and Cultural Organization. ‘Science’ was added to the name on the advice of British scientist Joseph Needham, among others. At the San Francisco Conference creating the United Nations, a separate meeting was proposed which led to the Conference for the Establishment of UNESCO in 1945.

Hotel Majestic, 19 Avenue Kléber, Paris, 1948.
During its time as the site of UNESCO’s original headquarters, the storied Hotel Majestic was known simply as UNESCO House. The Hotel Majestic had many lives, beginning as a luxury hotel visited by famous guests, before serving as a military hospital in World War I, as headquarters for the occupying German military administration in France during World War II, and as UNESCO House from 1946 to 1958
Copyright
UNESCO
Download this picture
Dimension - 4421x5741px
تحميل 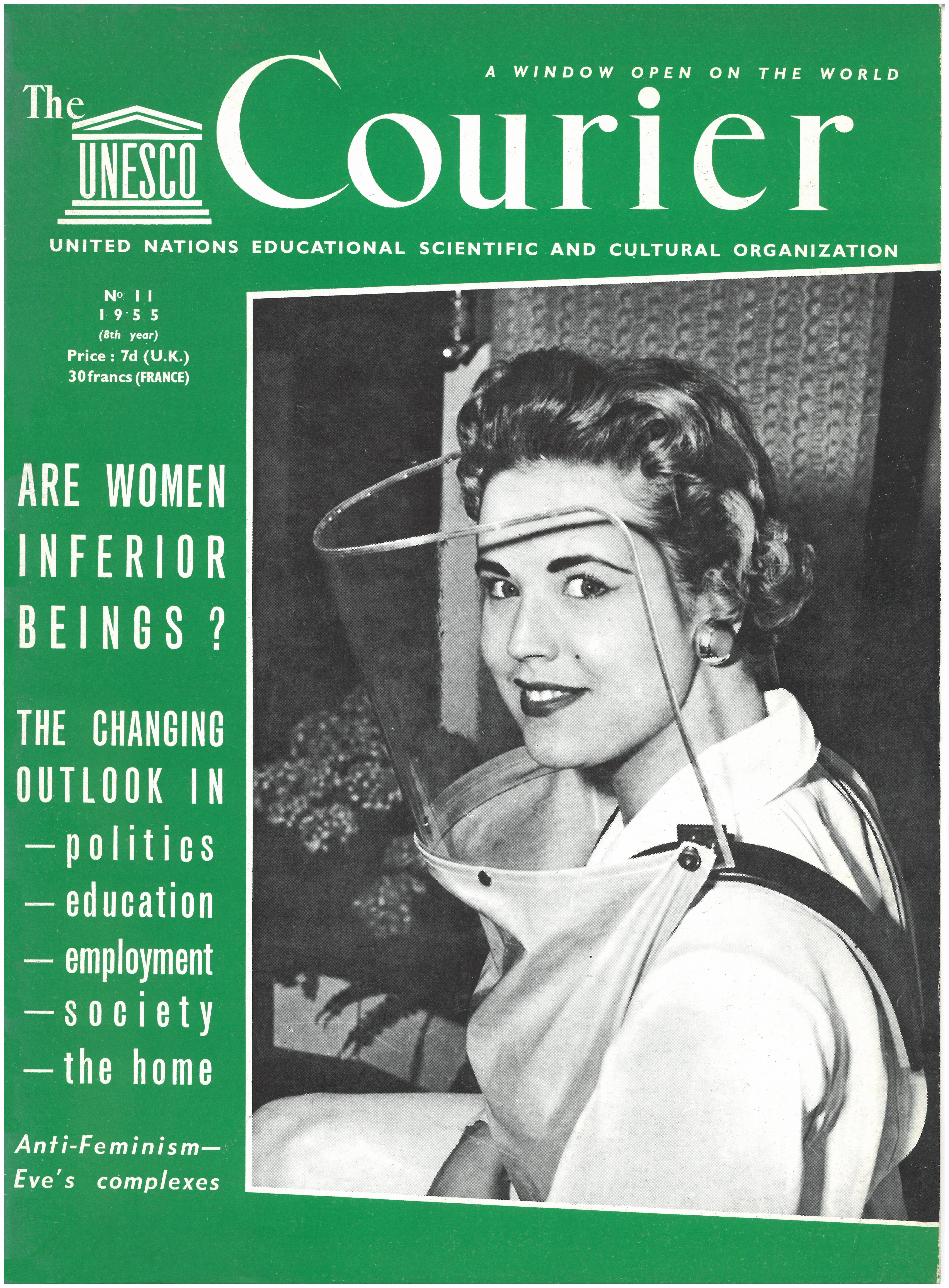 From the beginning, UNESCO undertook to informing the general public of its work. The Monitor first appeared in 1947 as a 4-page tabloid in English and French. In 1948, it was substituted by the Courier at the initiative of Sandy Koffler, the first editor-in-chief of the monthly black-and-white tabloid with 8 pages, in English, French and Spanish. Its format changed in 1954 to become an illustrated magazine. The number of language editions stood at 35 in 1991, including Braille. Some of the Courier’s major contribu-tors include Claude Lévi-Strauss, Trygve Lie and Carlo Levi. Writers Edouard Glissant and Adel Rifaat were among its editors-in-chief.
An exhibition devoted to the Courier was presented at the Georges Pompidou Centre in Paris in 1987. In 1989 the magazine under-went a radical transformation with a systematically intercultural approach to world issues and full-colour printing. Available online since 2006, the Courier serves readers in UNESCO’s six official lan-guages, and also in Catalan, Esperanto, Korean and Portuguese.
The Courier holds the memory of UNESCO and has reached millions of readers. It pursues its original mission: to promote UNESCO’s ideals and maintain a platform for dialogue between cultures.

UNESCO Courier, 1955, no. 11:
‘Woman power’ is today an increasingly vital factor in the economic life of most countries as millions more women take up jobs in industry and commerce. Conditions in modern factories are vastly different from those under which women worked even half a century ago. Shorter hours and health and safety regulations are now imposed by law. This young woman factory employee wears a new type of face guard for protection against flying particles of wood or metal.
Copyright
C.O.I. London
Download this picture
Dimension - 5362x7275px
تحميل
top