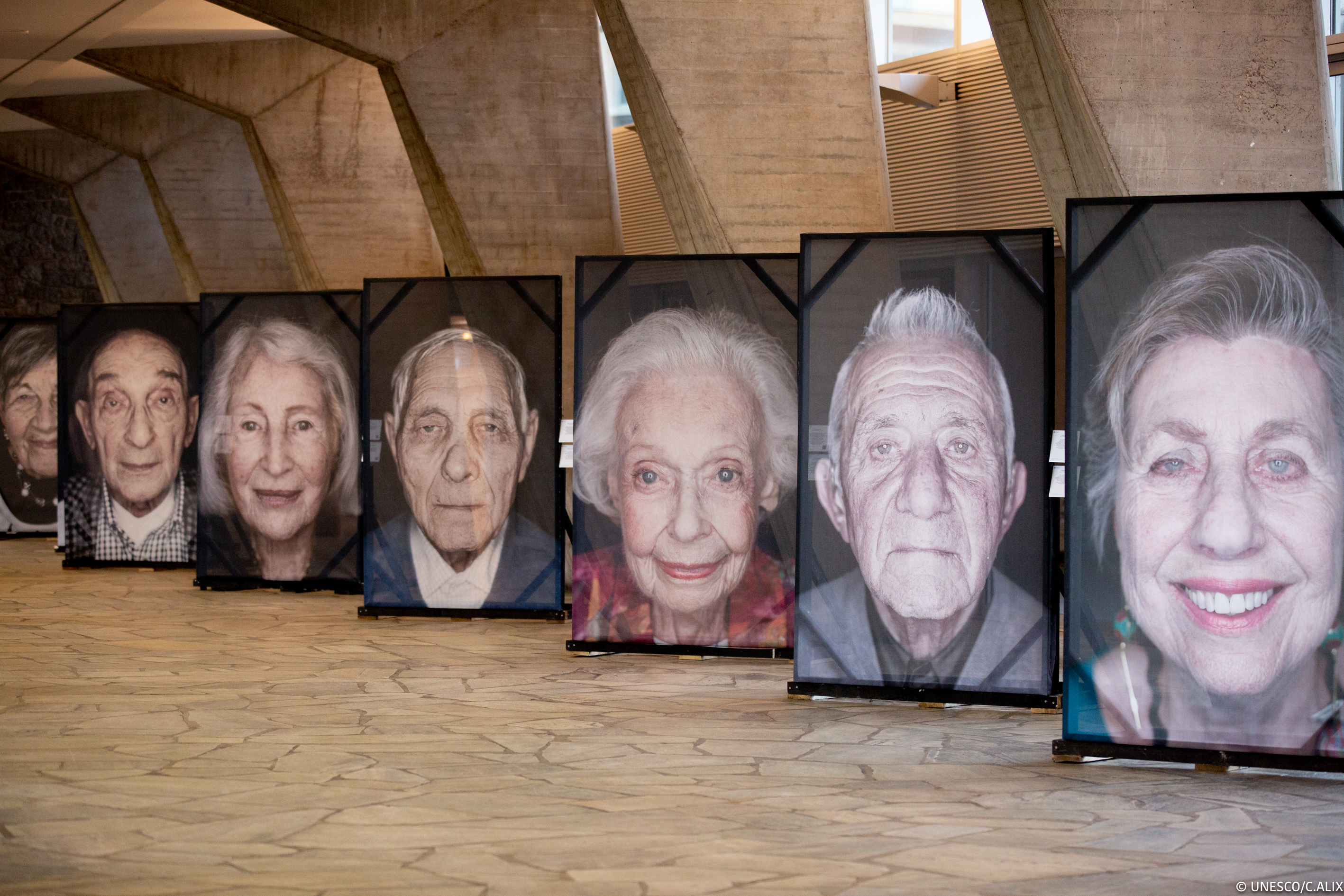 1/4
The fight against violent extremism and antisemitism
(1949–today)

Education plays a key role in preventing genocide by providing a forum to address past violence and strengthen the resilience of learners to antisemitism and all forms of prejudice and discrimination.

Education about the Holocaust, genocide and the prevention of violent extremism is part of the UNESCO’s efforts to promote Global Citizenship Education (GCED), a priority of the Education 2030 Agenda. Every 27 January, UNESCO marks the UN International Day of Commemoration in Memory of the Victims of the Holocaust, to pay tribute to the victims and recall the Holocaust’s history.

To address contemporary antisemitism, UNESCO cooperates with Jewish communities around the world to strengthen educational responses and preventive measures. Together with the OSCE Office for Democratic Institutions and Human Rights, it has published the first UN guide on addressing antisemitism.

As social media platforms have become magnets for claims that deny, distort or glorify the history of the Holocaust, UNESCO is advancing research and developing educational resources to counter this trend. From 2021, Facebook connects people searching for terms relating to the Holocaust in 12 languages to the website AboutHolocaust.org, developed by the World Jewish Congress and UNESCO, which provides essential information about the Holocaust and its legacy.

UNESCO has also developed guidance for policy-makers and teachers on education to prevent violent extremism and organized capacity-building initiatives in several regions for educators. In 2021, the UNESCO Office in Dakar began supporting a project to reinforce the resilience of young people from Burkina Faso, Mali and Niger to prevent violent extremism. In Niger, the Dakar Office is supporting a teacher’s guide on the prevention of violent extremism for the Sahel region, designed by UNESCO’s International Institute for Capacity Building in Africa (IICBA).

The UNESCO Office in Harare recently commissioned a review within the Southern African Development Community which revealed that curricula of all 13 countries included GCED components, whereas the South African Liberation History (SALH) was minimally taught. The study identified recommendations for integrating this history to promote peaceful coexistence in the region.
Copyright
UNESCO/Christelle Alix
Download this picture
Dimension - 2835x1890px
تحميل 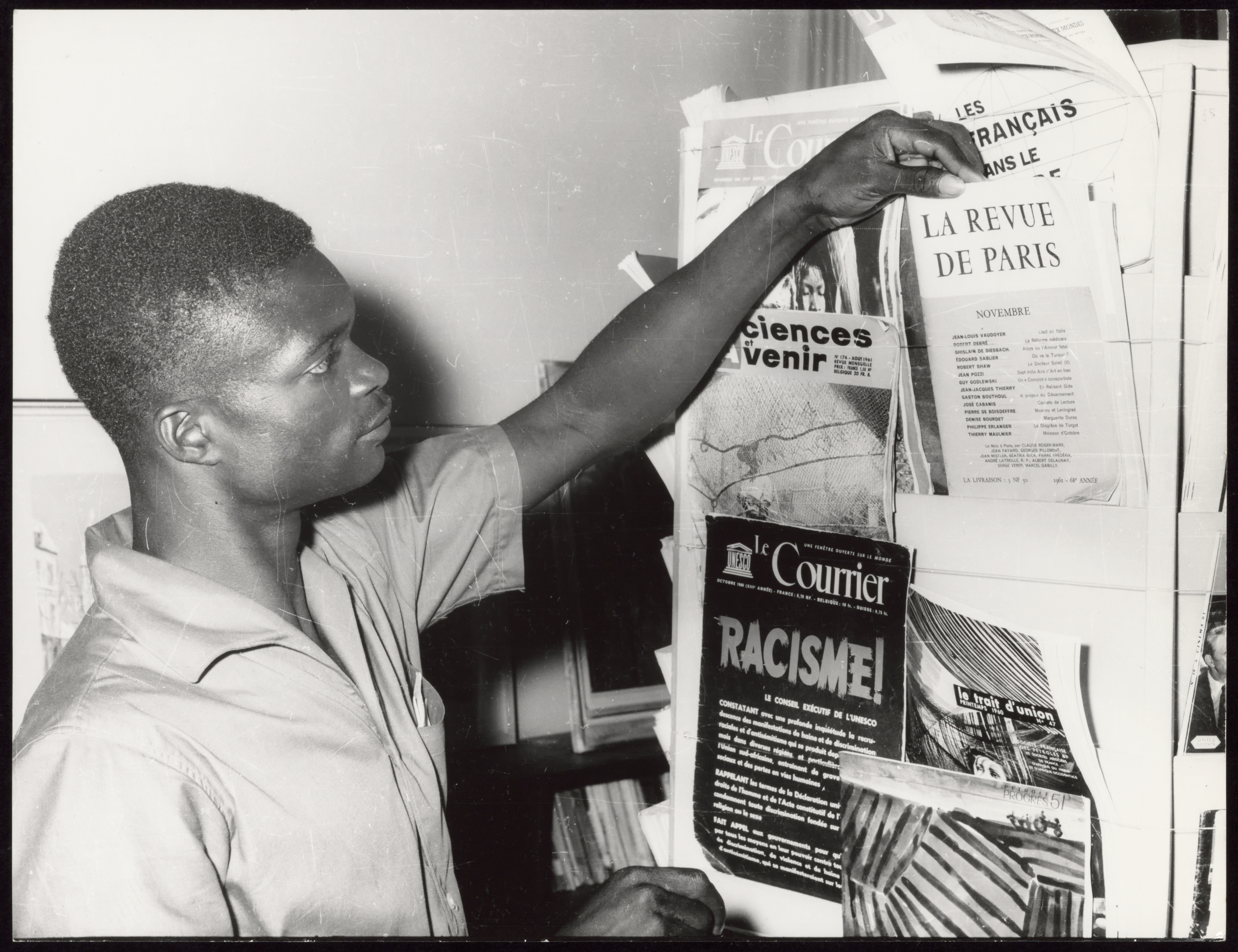 A lack of historical perspective prevents [the Western white man’s] realizing not merely how recent is his privileged position, but how transitory it may prove, and he regards it as a sign that he is predestined to create the values which men of other races and other cultures are at best merely capable of receiving from him.
(Michel Leiris, Race and Culture, UNESCO, 1958, p. 5)

In 1949, UNESCO launched an information campaign, based on meetings of anthropologists and biologists, to expose the fallacies of racism. The Race Question in Modern Science (1950) contained the first of a series of declarations on race and racial prejudice, followed in due course by others in 1951, 1964 and 1967. This work had tremendous consequences and influenced the 1954 US Supreme Court decision which declared unconstitutional to separate schools for Black and White students (Brown v. Board of Education of Topeka).

This was also the origin of the UNESCO series entitled The Race Question with titles by some of the 20th-century’s most acclaimed scientists and intellectuals: Race and Biology (L.C. Dunn), Race and Culture (Michel Leiris), Race and Psychology (Otto Klineberg), Racial Myths (Juan Comas) and Race and History (Claude Lévi-Strauss).

Some of these books had a resounding impact. In 1955, South Africa announced its decision to withdraw from UNESCO. Nelson Mandela –a UNESCO Goodwill Ambassador-embodied the universal aspiration for freedom that stands at the heart of UNESCO’s mission. In 1967, upon request from the UN General Assembly, UNESCO published Apartheid: Its Effects on Education, Science, Culture and Information.

The certitude that theories about racial superiority are both scientifically and morally barren led to a series of subsequent statements, including the Declaration on Race and Racial Prejudice (1978). In 2003, UNESCO adopted an Integrated Strategy to Combat Racism, Discrimination, Xenophobia and Related Intolerance.

As world communications have become increasingly massive and digital, UNESCO has transformed its fight against racism and discrimination with its International Coalition of Inclusive and Sustainable Cities, its Master Class Series against Racism and Discriminations, its partnerships with leading football clubs such as FC Barcelona, FC Malaga and Juventus FC.

UNESCO echoed the #IAmNotAVirus and #BlackLivesMatter movements with United against Racism, a video with prominent personalities issuing an urgent call for racial justice. In 2021, UNESCO held the first Global Forum against Racism and Discrimination.
Copyright
UNESCO/J. Lenglez
Download this picture
Dimension - 5763x4431px
تحميل 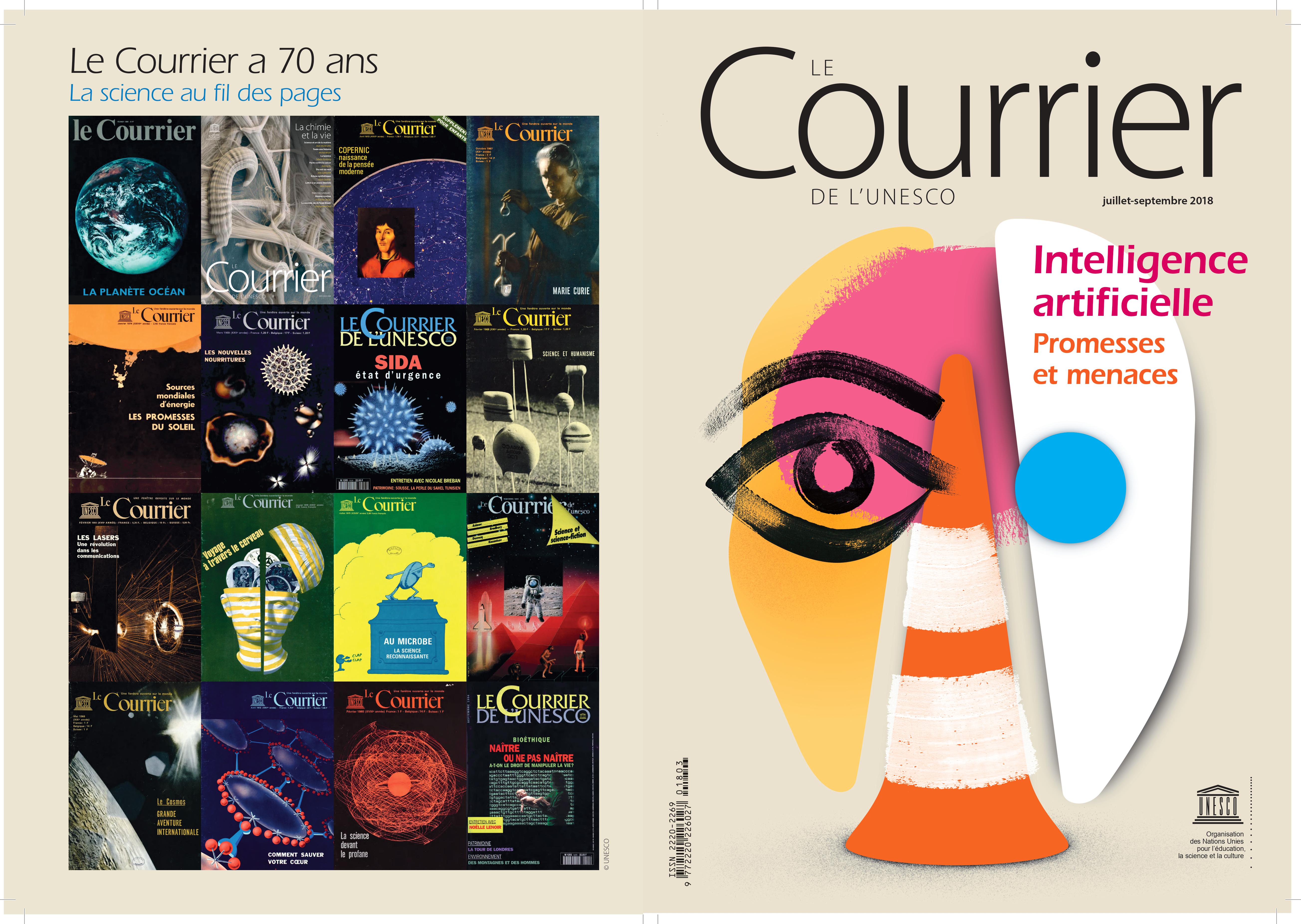 3/4
The ethics of science: from the human genome to artificial intelligence
(1976–today)

The Universal Declaration of Human Rights recognizes every person’s right to enjoy the benefits of scientific progress. Yet rapid development in science and technology have resulted in major dilemmas for humankind and the environment.

UNESCO’s work on the ethics of science and bioethics dates back to the 1970s, but it was in 1993, with the establishment of the International Bioethics Committee and the preparation of an international instrument on the protection of the human genome, that it began to oversee the universal regulation of scientific discoveries in medicine, life sciences and their applications. The Bioethics and Ethics of Science and Technology Programme’s greatest achievements were the adoption of the only legal instruments concerning bioethics: the Universal Declaration on the Human Genome and Human Rights (1997); the International Declaration on Human Genetic Data (2003); the Universal Declaration on Bioethics and Human Rights (2005); the Declaration of Ethical Principles in relation to Climate Change and the revised Recommendation on Science and Scientific Researchers (2017).

Artificial intelligence (AI) has enormous potential for accelerating human progress and sustainable development. Applications have drawn on AI even more since the outbreak of COVID-19, to accelerate vaccine research and improve tracing of the virus. However, its rapid development raises numerous ethical concerns. In 2019, UNESCO Member States decided to task UNESCO with the development of the first global normative instrument on AI.
In June 2021, an Intergovernmental Committee agreed on a draft text with recommendations by 24 international leading experts, scheduled for adoption in November 2021.
Copyright
UNESCO. Cover illustration: © Francesc Roig
Download this picture
Dimension - 5216x3704px
تحميل 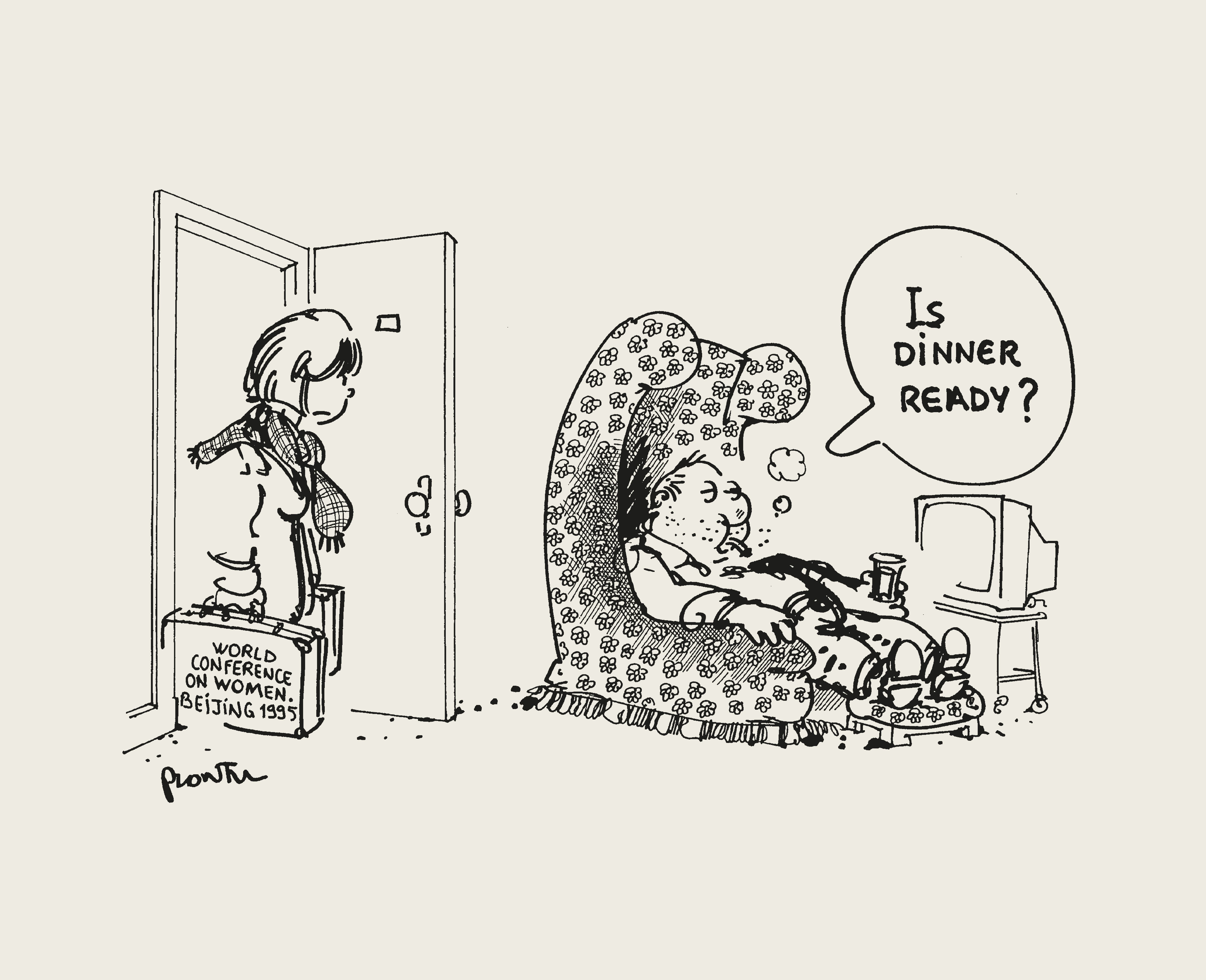 In order to contribute to ending discrimination against women, the United Nations proclaimed 1975 International Women’s Year. It was on that year that the UN convened the first World Conference on Women in Mexico City, with the objective to fight for their rights to fully participate in social, economic, cultural and political life.

Since its beginning, UNESCO contributed to this goal, and decided to take measures to improve the lives of women around the world, starting with girls’ right to education. A shift in perspective took place in 1995 in line with the outcomes of the Fourth UN World Conference on Women, in Beijing, China, which called on decision-makers to aim at a more ambitious, holistic and systematic change: towards gender equality. In response, UNESCO’s Medium Term Strategy (1996–2001) adopted a gender main streaming approach in all UNESCO’s programmes and activities. The General Conference unanimously adopted Gender Equality as a UNESCO Global Priority, along with Africa, in 2007.

The transformation of UNESCO’s engagement from women’s empowerment to gender equality has been echoed in both programme implementation activities and major partnerships. For instance, in 1998, UNESCO joined forces with L’Oréal to issue the first Prize for Women in Science. Since then, over 3,000 women scientists have been celebrated and three of the laureates have since been awarded the Nobel Prize. In 2019, UNESCO sparked a global conversation with its landmark research on gender bias in artificial intelligence that will continue through the implementation of its 2021 Recommendation on the Ethics of Artificial Intelligence.

In the wake of the COVID-19 school closures, UNESCO has been leading a global coalition of partners to address the deepening gender disparities in education and ensure that #LearningNeverStops.

Today, UNESCO is supporting governments and their partners to ensure equal access to gender-transformative inclusive education that empowers all learners, without discrimination. It is supporting women who dare to innovate and shape the global discussions, such as artists, journalists and scientists, to prevent them from becoming victims of censorship and attacks, to ensure their safety and to build their space in leadership and decision-making. UNESCO also stands side by side with men who take actions to reject harmful forms of masculinity.
Copyright
UNESCO
Download this picture
Dimension - 6577x5345px
تحميل
top