Audrey Azoulay, Director-General of UNESCO, has condemned the killing of two radio broadcasters in the Philippines: Renato Blanco who was killed in the town of Mabinay on the island of Negros on 18 September, and Percival Mabasa who was killed in Las Piñas City, near the capital, Manila, on 3 October.
UNESCO
6 October 2022
I condemn the killings of broadcasters Renato Blanco and Percival Mabasa. The violent suppression of freedom of expression and media freedom affects society as a whole, which is why I urge the authorities to investigate the motives behind these crimes and ensure that their perpetrators are brought to justice.

Blanco, of Mabinay-based Power 102.1 DYRY RFM, was stabbed to death on his way to work.

Better known as Percy Lapid, Mabasa hosted a programme on DWBL 1242 and was known for his critical perspective on political and social issues.

UNESCO promotes the safety of journalists through global awareness-raising, capacity building and by coordinating the implementation of the UN Plan of Action on the Safety of Journalists and the Issue of Impunity. 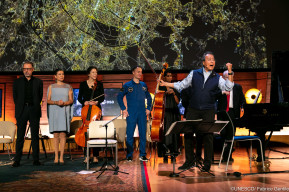