A Brazilian delegation travelled to France to recover the fossils on 24 May before paying a courtesy visit to UNESCO headquarters in Paris the next day.

‘This is a success story for science, culture and international cooperation’, enthused Ms Shamila Nair-Bedouelle, Assistant Director-General for Natural Sciences at UNESCO, as she examined a replica of one of the seized fossils (see photo) donated to UNESCO by the delegation.

‘Each of the recovered fossils is worth several thousand euros’, explained Mr Hindemburgo Chateaubriand Filho, Assistant Prosecutor-general and Secretary for International Cooperation in the Brazilian Federal Prosecutor’s Office. ‘The ongoing criminal investigation in France has uncovered a professional network trafficking cultural goods from Brazil and has revealed the existence of branches which are doing the same in other countries’ he added.

He himself was investigating similar trafficking cases, he said. With it being so difficult to monitor a vast territory like Brazil, international co-operation could make all the difference. The Araripe UNESCO Global Geopark alone covers 3,441 km2.

Ms Nair-Bedouelle thanked the Brazilian authorities and the staff of the UNESCO Global Geopark for their perseverance in combating this trafficking ring.

These fossils are considered cultural property and fall under the special protection of the UNESCO Convention of 1970 on the Means of Prohibiting and Preventing the Illicit Import, Export and Transfer of Ownership of Cultural Property, which has been ratified by both Brazil and France.
Shamila Nair-Bedouelle Assistant Director-General for Natural Sciences, UNESCO

She went on to say that the restitution of these fossils would ‘allow them to be exposed in the Museum of Paleontology Plácido Cidade Nuvens in Araripe UNESCO Global Geopark, where they belong’.

Professor Allysson Pontes Pinheiro, director of the museum, concurred. ‘It is very important for us that these 348 fish, each of which is more than one metre long, and these 650 small stone tiles containing fossils of insects, fish and plants, all encapsulated for millions of years in rocks, return to Araripe, to the Cariri people, to the Museum of Paleontology Plácido Cidade Nuvens, where they will be a highlight of our collection’, she said.

A Brazilian delegation donates a replica of a fossil from Araripe UNESCO Global Geopark to UNESCO. It is a replica of one of the fossils that had been stolen in the basin of Araripe, were seized by French customs, and eventually returned to Brazil.
UNESCO

The Araripe UNESCO Global Geopark in the Araripe Basin is renowned for the quality of preservation and quantity of its fossils, which are very diverse. The Cretaceous period was characterized by a relatively warm climate, resulting in high sea levels that created numerous shallow inland seas. These oceans and seas were populated with now-extinct marine reptiles, ammonites and molluscs (rudistes), with dinosaurs reigning over the land. This was an ice-free world in which forests extended to the poles. During this time, new groups of mammals and birds appeared, as well as the first flowering plants.

The Araripe UNESCO Global Geopark studies the interlinkages between geodiversity and biodiversity and invests in conservation programmes. It established the Environmental Education and Interpretation Centre in 2010, which designs interactive activities for the general public, schools and universities. The creation of the park has also stimulated the region’s ecotourism sector.

The geopark works closely with the indigenous Cariri population. Over time, the geopark’s relative isolation from major cities has forged a distinct cultural identity with folkloric dances, songs, religious and artistic expressions which keep the traditions of their ancestors alive. 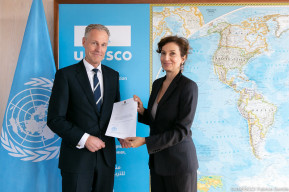 Article
Permanent Delegate of the Kingdom of Norway to UNESCO (October 2022)
October 4, 2022
top