Mafraq, 13 March 2018 – On 8 and 10 March, 24 students at Al al Bayt University in Mafraq attended a training session on radio news and program production organized as part of the EU funded and UNESCO Amman Office implemented “Support to Media in Jordan” project.

The training was part of a larger capacity development support program provided to Al al Bayt University over the last two years as part of the Support to Media in Jordan project. Several radio experts and consultants have been working with the university’s faculty, staff and students on the basics of setting up a radio station, institutional issues such as how to form an advisory board, ensure editorial independence, and manage the station, as well as technical skills such as radio production and editing. 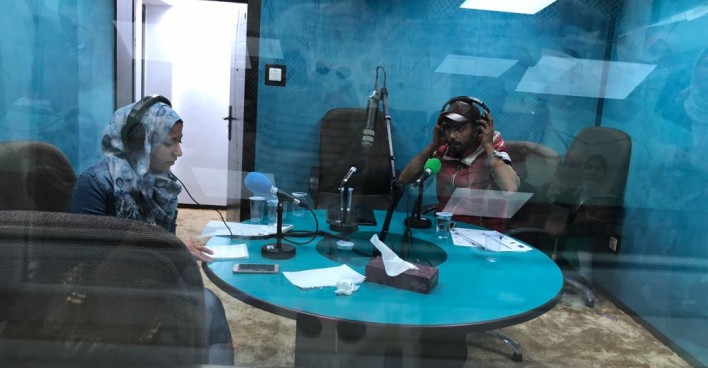 The University received a FM license (103.5 FM in Mafraq) to operate several years ago and has not been able to set up due to lack of funds and expertise. The equipment to set up the initial radio station was generously provided by the EU as part of a larger 1.5 million euro donation to develop local radios and universities around Jordan. At Al al Bayt, this includes all equipment needed to set up the station – mixers, microphones, computers, specialized desks, receivers and a transmitter.

The training was conducted by radio journalist Samia Kurdieh, and consisted of an in-class day on the basics of news and radio production concepts. The second day was a practical session in the radio station where the students practiced their newly acquired technical skills. Students came in for the training on their days off classes and were very motivated to learn new skills and contribute to building the university’s first radio station.

“I came here to learn something new and I feel I can do something for the community. Our generation can be an influence for something positive for the community of Mafraq. This is an opportunity for us!” said Maha Qyam, 2nd year student and training participant.

Samah Othman Issa, a 3rd year business administration student said that she realized how much the university needed something like the radio station, a place where people can share their ideas and issues and students can make their voices heard outside of the university. “The radio is a tool for us to reach people who need help,” she added.

Dr. Sayel Dughmi, radio manager, thanked UNESCO and the European Union for supporting the development of Al-Bayt University’s radio station, which has the potential to contribute to improving the offer of cultural, social and intellectual programs to the students and the surrounding community, he said during his welcome address at the training. The station is due to start broadcasting in the next several months, once staff and volunteers are hired and trained.

News
Protecting students’ right to education during COVID-19
November 1, 2020
News
Italy announces 800,000 EUR for strengthening the education system in Jordan in partnership with UNESCO and the Ministry of Education
July 6, 2020
News
Paving the way towards more peaceful communities in East Amman - The Story of Abdallah
June 27, 2020
News
When Peacebuilding meets Recycling - The Story of Abdullah
June 17, 2020
top