Tropical Cyclone Pam struck Vanuatu from 10 to 14 March 2015, causing widespread damage across the entire country composed of over 80 islands. More than half of  the population was directly affected. Shefa and Tafea were the hardest hit provinces.

Since early April, UNESCO has engaged with partnering UN agencies and the World Bank in a Government-led Post Disaster Needs Assessments (PDNA) to the most affected areas of the island chain. The purpose of the PDNA is to gather first-hand information on the impact and overall damage and loss caused by cyclone Pam, and to identify and cost recovery and reconstruction priorities.

Hand-in-hand with the Vanuatu Culture Centre (VCC) of the Ministry of Internal Affairs, UNESCO has been leading the PDNA in the field of culture, focusing on the recovery of affected cultural institutions, as well as heritage buildings and sites. The 10-days mission to Vanuatu was undertaken by the UNESCO Office for the Pacific States and included also experts from ICOMOS.

The assessment  has revealed significant damage and losses to the cultural resources of the country. Vanuatu’s only World Heritage site, the cultural landscape of Chief Roi Mata’s Domain (CRMD), was badly affected by the cyclone. The domain consists of three early 17th century AD sites on the islands of Efate, Lelepa and Artok and includes Roi Mata’s residence, the site of his death and Roi Mata’s mass burial site. Chief Roi Mata’s Domain is an outstanding example of a cultural landscape representative of Pacific chiefly systems and the connection between Pacific people and their environment over time. Roi Mata was notably worshiped because he brought peace to those war-thorn islands. Roi Mata left a great heritage of bonding cult, which helped root peace amongst the people on this island. The site reflects the convergence between oral tradition and archaeology; and bears witness to the persistence of Roi Mata’s social reforms and conflict resolution, still relevant to the people of the region.

Strong winds and intense rain resulted in significant destruction to the cultural landscape and its livelihoods. They also triggered landslides that affected the stability of Fels Cave on Lelepa island, where Roi Mata took his last breath. Fels Cave and its wall paintings is a major a tourist attraction and a great source of revenues for local community.

Also the Malvatumauri Chief “Nakamal”, considered a national treasure, sustained significant damage. The nakamal, a significant traditional community structure dating back several centuries, is used for decision-making, governance, teaching and dispute resolution. Traditionally every village had a nakamal and indigenous knowledge-based skills have adapted this structure to resist cyclones. Despite significant damage sustained, traditional structure of “nakamals” proved better performance during Cyclone Pam and demonstrated the value of practiced traditional knowledge as well as the reason more for its further preservation as part of living heritage and culture.

Cultural institutions including the Vanuatu Culture Centre Complex and its facilities were also severely damaged and need urgent repair. More generally, Traditional knowledge, skills and cultural practices have always underpinned the peoples of Vanuatu’s ability to live, thrive and adapt to changing environments throughout history. The cyclone has impacted tremendously on community life and facilities, and has increased the risk of traditional building skills to disappear.

Short-term emergency restauration measures and mid-term recovery priorities for the safeguarding of cultural heritage, identified by the PDNA, include:

The final PDNA compiling all the cluster reports covering different sectors will be presented to the Government of Vanuatu on 24 April 2015. 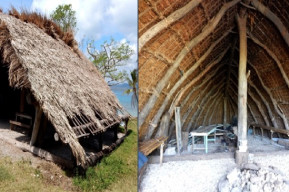