On the International Day of Peace, UNESCO invited high-level representatives of the United Nations (UN), the European Commission, internet platforms and experts of civil society organizations to discuss the critical role that social media play in promoting peace and enhancing access to information. Taking stock of the practices gained from the implementation of two UNESCO projects funded by the European Union (EU) Instrument Contributing to Stability and Peace, Social Media 4 Peace and #CoronavirusFacts, the event gave the opportunity to examine pressing global issues of social media content governance, in particular in conflict-prone environments, and the need to develop common principles and workable practices for an online space that can impact at local level.

A high-level session aimed at discussing the role of the EU, the UN and internet companies in tackling challenges of disinformation and hate speech. Vice-President of the European Commission, Věra Jourová, affirmed the EU’s will to implement a co-regulation of online content while upholding freedom of expression.

The idea is not to come up with farfetched rules that will be difficult to implement. We want to foster freedom of speech and implement a dual approach: on one side illegal and other legal but harmful.
Věra Jourová, Vice-President of the European Commission

But, co-regulating online content requires collaborating with internet platform companies, explained Alice Wairimu Nderitu, UN Special Adviser on the Prevention of Genocide: “One of the key components of the UN Strategy and Plan of Action on Hate Speech is that it acknowledges social media companies as key partners to address and counter hate speech” Ms. Nderitu said. Markus Reinisch, Vice-President Public Policy at Facebook Europe, Middle East and Africa, welcomed upscale cooperation with institutions to better tackle online hate speech, misinformation and disinformation saying that institutions’ decision on tools giving clarity and consistency to companies in dealing with hate speech, misinformation, and disinformation, “are not only desirable but necessary for social media companies.” Similarly, Matt Brittin, President of Google Europe, Middle East and Africa, explained that ‘We need to update the rules, but we also need to have ongoing regulatory dialogue because these challenges develop and evolve incredibly fast’. UNESCO’s representative, CI’s Director Guy Berger referred to UNESCO’s initiative advocating for transparency of online platforms, and on the theme recited a poem written for the occasion (download below).

During a session dedicated to the new UNESCO Project ‘Social Media 4 Peace’ funded by the European Union, concrete examples from the three pilot countries of the project – Bosnia and Herzegovina, Kenya and Indonesia - of how online hate speech and disinformation have a direct impact offline on tensions and conflict dynamics were discussed. As elections are approaching in Kenya, the Director of UNESCO’s Regional Office for Eastern Africa and Representative to Kenya, Hubert Gijzen, highlighted the role social media may play in countering online disinformation and hate speech during the campaign. Maida Bahto-Kestendzic, Project Coordinator at the Bosnia and Herzegovina Press Council, explained that self-regulatory media are receiving many complaints of journalists having their news articles illegitimately removed from online platforms without a remedy and dialogue possible with the internet platforms concerned. Based on these experiences, Simon Bojsen-Møller, Deputy Head of Unit at the European Union Foreign Policy Instrument, highlighted that “through Social Media 4 Peace [project] we are piloting a combination of general rules and locally adapted approaches in dealing with social media – that can be replicated globally.”

The second panel took stock of the achievements of UNESCO’s project ‘#CoronavirusFacts, addressing the ‘Disinfodemic’ on COVID-19 in conflict-prone environments, implemented since April 2020 and funded by the European Union’s Instrument contributing to Stability and Peace.  With both global activities and tailored actions for nine countries and four regions/sub-regions to enhance access to information and mitigate the spread of online disinformation and hateful narratives at a critical time during the pandemic, the project has engaged over 27 000 journalists, fact-checkers and content-creators from 157 countries over the past year and a half. Project stakeholders and partners, shared practical experiences from the frontlines of tackling COVID-19 disinformation, including Cecilia Napido Gonçalves, Director of the Department of Research, Planning and Cooperation at GABINFO, Mozambique;  Khaled Salah, Director of UNESCO Regional Office for Central Africa; Sana Hassan, Editor in Chief of the Iraqi Youth News Agency;  Kenneth Okwaroh, Executive Director of the Africa Centre for People Institution and Society in Kenya; and Olivia Sohr, Director of Impact and New Initiatives for the fact-checking organization Chequeado in Argentina. The panel reflected on how resilience against conflict and tensions - exacerbated by the COVID-19 pandemic - has been strengthened.

As a powerful common theme, their interventions emphasized the importance and impact of the new partnerships created during the pandemic and as a result of the project. Illustrating this, Janet Kincaid, Training Operations Officer & Project Manager for the Department of Communications at the World Health Organization, described the cooperation with UNESCO on the crisis response and how online interactive courses were developed for journalists around the world thanks to a global partnership between UNESCO, UNDP, WHO and the Knight Center for Journalism in the Americas at the University of Texas at Austin in the context of the #CoronavirusFacts project. She firmly underlined the added-value of this collaboration.

The Massive Open Online Courses allowed WHO, with its focus on science, and UNESCO, with its focus on freedom of the press, to reach larger numbers of journalists and quickly bring them up to speed on how to write about COVID-19 credibly based on science and evidence.
Janet Kincaid, Project Manager for the Department of Communications, WHO

During the last session of the conference, panelists highlighted the need to, on the one hand, rely on international global standards to govern online content but at the same time consider social, cultural and linguistic nuances to develop and review content moderation and curation rules and tools in a localized manner. Senior Researcher at the Internet Institute of the University of Oxford and Associate Professor, Jonathan Bright, emphasized that ”There are big ethical questions behind Artificial Intelligence content moderation” and insisted on the need to make human moderators more relevant to address the complexity of online potential harmful content. Speakers Julie Owono from the Facebook’s Oversight Board and Pierre-François Docquir from Article 19 stressed the need to define efficient safeguards of freedom of expression in online content moderation. “I see a space for independent, national, multistakeholder fora bringing local aspects of societies that could be key in the implementation of new rules emerging, such as social media councils”, he said.

Overall, the day enabled rich discussion and reflection. Extracting some key recommendations from the day on how to invest in and advance the right of freedom of expression and access to information as enablers of peace, the Director of the UNESCO Brussels Liaison Office to the European Union, Louise Haxthausen closed the session by underlining the needs to support journalists and enable their vital work, including by guaranteeing their safety; to strengthen fact-checkers and fact-checking; to step up transparency of internet companies, including platform moderation and curation policies and of data; to enable both monitoring and understanding of the spread and impact of hate speech; and to empower youth and other citizens to critically process what they read and hear through media and information literacy in order to build resilience to disinformation and hateful narratives.

Based on the central tenet that information is the opposite of disinformation, the UNESCO project #CoronavirusFacts leverages the pivotal role of freedom of expression and access to information to address information needs in times of COVID-19 and to tackle the massive wave of disinformation which threatens to impact democracy, sustainable development and stability around the world. Funded by the European Union, the project which has activities both at the global level, in four regions and in nine countries, supports professional, diverse and independent media’s capacity to report on the pandemic; strengthens local fact-checking organisations to debunk misinformation; and empowers youth and other citizens to critically process what they read and hear linked to COVID-19 through training in media and information literacy. Due to unprecedented challenges for the media and digital technology sectors, UNESCO has created a Resource Center of selected responses to COVID-19.

The Social Media 4 Peace project funded by the European Union Instrument contributing to Peace and Stability aims at strengthening the resilience of societies to potentially harmful content spread online, in particular hate speech inciting violence, while protecting freedom of expression and enhancing the promotion of peace through digital technologies, notably social media. The project is implemented in three pilot countries: Bosnia and Herzegovina, Indonesia and Kenya. 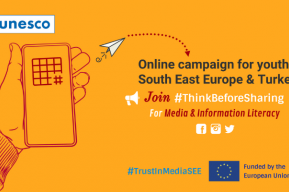 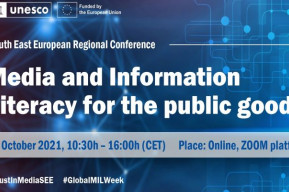 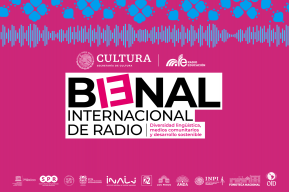 Press release
Building an ecosystem that reflects the multicultural richness of the country, key to preserving native languages in Mexico
6 September 2021 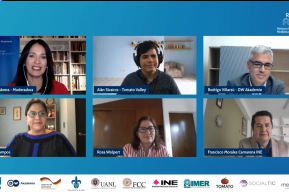 Press release
Launch of the MIL Mexico Network, an effort to promote Media and Information Literacy in the country
1 September 2021
top