“We are trying to use teaching about the past as a platform to teach tolerance within the Namibian community.”

Ndapewoshali Ashipala at the International Conference on Education and the Holocaust (ICEH), organized by UNESCO and the U.S. Holocaust Memorial Museum in December 2017 in Washington, DC.
© USHMM
28 June 2018

An interview with Ndapewoshali Ashipala on education about the Holocaust and genocide in Namibia.

Ndapewoshali Ashipala works for the Museum’s Association of Namibia. Together with her colleague Memory Biwa, she has participated in the second International Conference on Education and the Holocaust (ICEH), organized by UNESCO and the U.S. Holocaust Memorial Museum in December 2017 in Washington, DC. As outcome of their participation, they have created a project to advance education about the Holocaust and genocide in Namibia, including the first Namibian exhibition on the 1904 genocide against the Herero and Nama that will be displayed in all 14 Namibian states.

Why is it important to teach about the Holocaust in Namibia?

It is important because Namibia has a similar history to the Holocaust. There was a genocide in Namibia in 1904 when Namibia was under German colonial occupation. There are many similarities with the genocide of the Jewish people, including concentration camps, racial science and the order to exterminate a group of people. There are more similarities even in the way in which the genocide was carried out.

The Namibian school curriculum foresees teaching about the Holocaust, but not the genocide in Namibia. So we want Namibian learners to understand the history, especially now in the context of the reparation negotiations between the Namibian government and the German government. We want students to learn about this history, because the average Namibian does not know much about this genocide -  some don’t even know that it happened at all. Since students have some understanding of the atrocities perpetrated by Nazi Germany, we want to link lessons on the genocide in Namibia to the Holocaust, helping students to better understand what happened in Namibia in 1904 and what is happening today.

For us, this also means to teach about other forms of discrimination, racism and tribalism that also have been very present in Namibia, because of our colonial past, especially during the Apartheid government, a regime that emphasized ethnical barriers. We had a class system based on races and ethnicity. Even among black people, we were divided into tribes and ethnic groups in a way that considered certain groups “closer to white”. The more you were considered ”close to white”, the more privileges you got. This influenced your living situation, what job you could have and the kind of education you could receive. All of that is still, even 28 years after Namibia’s independence, very rife in our society. The [colonial] system managed to convince people, that were pretty much the same and had lived together, that they should hate each other and that some of them were better than others.

This has always been an underlying issue in Namibia. Very recently, two members of the parliament were fired from their positions because of tribalist comments and there has been a little bit of violence, tribal related violence, in the South of Namibia. It is becoming a very big issue within the Namibian community as well. It is starting to erupt again.

So with our exhibition, called “The Namibian Genocide – Learning from the Past”, we are trying to teach about the Holocaust and the genocide [in Namibia] to show that this is what can happen if you continue to push the narrative of “us vs. them.”

What role can education play in addressing difficult and violent episodes in Namibia’s history? What could be improved in this regard in the Namibian education system?

The Namibian national curriculum does not include much on the genocide in Namibia, but it covers the crimes of Nazi Germany. Up until grade 10, history is a compulsory subject, but it is very general and more factual, along the lines of “this happened on that day”. It is only in grades 11 and 12, where history is an elective, that the curriculum becomes more detailed, involves learners and demands a more critical reflection of history.
In the Namibian education system, we focus very much on STEM-subjects like science, technology and mathematics. This is the model that our country has gone with to give us economic independence. Because of that, history is seen as that sort of subject that only those kids take that could not get into the STEM-subjects. History is often the last choice of many students; only very few are taking history in grade 11 and 12 and are educated about our violent past. However, these lessons are also mostly focused on our independence struggle and less on the Holocaust or the genocide in Namibia.

With our ICEH Team, we are trying to supplement the history curriculum. That is why we are working with different entities like the National Institute for Education and Development (NIED), who are responsible for developing the Namibian curriculum. We are working with them to develop our exhibition from something that is “just” visited into something that is incorporated in classrooms.

Which steps are you taking with your 2017 ICEH Team to contribute to advancing education about the Holocaust and genocide in Namibia?

The Namibian Team that participated in the 2015 ICEH already developed an exhibition. What we are doing now is to review it, because we have now received government input. Because it is such a sensitive time and subject, we have to make sure to use appropriate terminology and that the exhibition is in compliance with the government’s and our donors’ legislative requirements. We just had a workshop with the people who are developing the curriculum and chief education officers from all over the country and they reviewed the content. There were a few changes, so we are working on adjusting those and then we are going to reprint the exhibition.

We have funding from the Ministry of International Relations and Cooperation, to have our exhibition travel the country, alongside the “Deadly Medicine: Creating the Master Race” exhibition from the U.S. Holocaust Memorial Museum. There will be an official launch for each of Namibia’s 14 regions. We will have teachers and learners come to visit the exhibition. Every teacher who will visit the exhibition will receive a guidebook, which includes a printed version of the exhibition and additional questions for classroom discussions. The guidebook will also be made available for regional education departments and will serve to supplement the current curriculum until our teaching materials are incorporated in the official curriculum. In the end, the exhibition will probably come back to the Museum’s Association of Namibia, where we will loan it out for specific events. But first, our aim is to get it to all regions, and we have a very big country, so this is going to take us about two years.

How was the joint initiative of UNESCO and the USHMM beneficial to the development of your project?

The 1904 genocide is a very sensitive subject to raise in public, especially now in the context of the negotiation of the Namibian government and Germany. Due to the ongoing discussions, we needed time to create the exhibition. The support and patronage of UNESCO and the USHMM have helped to give international legitimacy to the exhibition and we are now receiving the official support of the Namibian government to display it.

What do you hope to achieve with this project?

Our project and exhibition are called “Learning from the past” and this is very much what we are hoping to achieve. We are trying to use teaching about the past as a platform to teach sensitivity and tolerance within the Namibian community. And not just tolerance about race but also other issues that are discussed in our communities, like gender-based violence, sexism, homophobia and any type of “–ism” or phobia. We are trying to heal a community, which is much divided on religious and traditional issues. That is why we are trying to build a community who sees itself as one, rather than divided into “us vs. them”, that sees the beauty of diversity instead of exaggerating differences. We are trying to build a multicultural community, in which everybody plays a beautiful role.  In this context, talking about teaching “tolerance” is even a bit mild, it is more teaching appreciation of the other for their differences and loving their differences as opposed to seeing them as something to fear or hate. 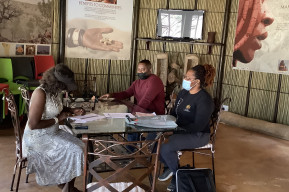 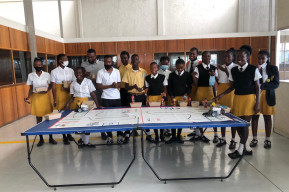 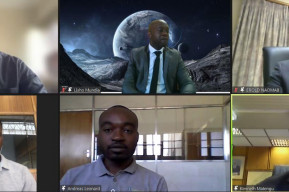