UNESCO’s Observatory of Killed Journalists monitors the killing of journalists and media workers across the globe.

The Observatory makes UNESCO’s work on monitoring and reporting on the safety of journalists, as well as the issue of impunity for these crimes publicly accessible. It forms an essential part of the implementation of the UN Action Plan on the Safety of Journalists and the Issue of Impunity.

Based on the information provided by Member States on judicial inquiries into journalist killings, every two years an analytical report is presented by the Director-General on the Safety of Journalists and the Danger of Impunity to the Intergovernmental Council of the IPDC.

UNESCO is responsible for these monitoring mechanisms under international law and for the collection of data for SDG 16.10.1 of the Sustainable Development Goals in conjunction with other relevant UN agencies. 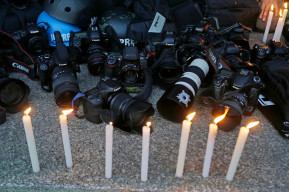