“Literacy is key to open doors, and the energy and results reached by the Dominican people are an inspiration”

On 16 January 2015, during her official visit to the Dominican Republic, the Director-General of UNESCO, Irina Bokova, participated in a massive encounter with about 5000 voluntaries and beneficiaries of the National Literacy Plan. The National Literacy Plan, also known as “Quisqueya Aprende Contigo,” was created by President Danilo Medina in 2012 declaring literacy as a fundamental human right and aims at eliminating illiteracy in the Dominican Republic.

At this event, the peak of emotion was reached when a 67 year old lady shouted to the assembly that her dream became reality and that her alphabetization brought happiness to her family.

“This is the result of the National Literacy Plan and now that the Dominican Republic has become a Global Education First Initiative Champion Country, designated by the United Nations Secretary-General Education, the country should share this experience worldwide and maintain momentum,” declared the Director-General.

“The National Literacy Plan is keeling a permanent progress towards its initial objective to reach 700 thousand young people and adults,” she continued. “From the start, this initiative has been guided by a clear vision. Literacy is a human right and a fundamental element for all societies. It is the key-stone of gender equality, poverty reduction and employments creation.”

“Literacy is key to open doors, and the energy and the results reached by the Dominican people are an inspiration for us,” she concluded.

At the event, the Director-General met with Mr. Pedro Luis Castellanos, Director of Special Programmes of the Presidency and Coordinator of the technical team on literacy. She also witnessed the inauguration of the National Congress of Literacy and Adult Education.

The Minister of Education, H.E. Mr Carlos Amarante Baret declared that “education is the other word for freedom”.

The Director-General highlighted the important role of universities in fostering creativity saying: “universities could create a dialogue among disciplines and strength the links between scientific policy and practice, in order to nurture the creativity that societies need today.” Paying tribute to Minister Ligia, the Director-General said mentioned her merits as educator and teacher of several generations.

“At UNESCO, we have had the privilege of having Minister Ligia head numerous Dominican delegations at our events, including several sessions of the General Conference. “On behalf of UNESCO and in my own name, I pay tribute to Minister Ligia Amada Melo Quesada”.

She inaugurated the new premises of the Dominican National Commission for UNESCO, which is a strong partner collecting forces of the civil society.

On the previous day, the Director-General also visited the Father Eulalio Antonio Arias primary School in the framework of the National Literacy Plan. She was accompanied by the Minister of Education, H.E. Mr Carlos Amarante Baret. The children wrote a special song to thank the Director-General for her strong commitment for values and a fight for a better life.

Finally, she concluded her visit by a meeting with the Minister of External Relations, H.E. Mr Andrés Navarro Garcia, and discussed the challenges for the Dominican Republic. 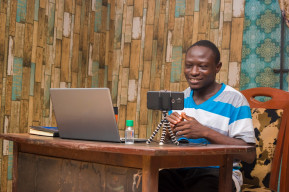