The project launch brought together more than 150 people including representatives of the five project beneficiary countries – Cameroon, Central African Republic, Chad, Niger and Nigeria – and their development partners. Representatives of civil society, local communities and indigenous peoples also participated in the development and launch of the BIOPALT project, which asserts that it will not ‘do anything for communities without communities’. 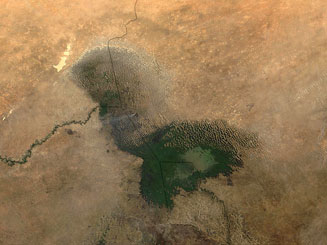 The BIOPALT project aims to strengthen the capacity of Member States of the Lake Chad Basin Commission (LCBC) to safeguard and sustainably manage the hydrological, biological and cultural resources of the Lake Chad Basin, thereby contributing to reducing poverty and promoting peace. The project involves a wide range of activities ranging from the establishment of an early warning system for droughts and floods, to the restoration of degraded ecosystems such as the habitats of elephant and Kouri cattle (Bos taurus longifrons) – the latter an emblematic endemic species that plays an important role in social cohesion. The project also focuses attention on income-generating activities through the promotion of a green economy and the development of the basin’s natural resources. In particular, the project will help states prepare their application files for the creation of a transboundary biosphere reserve in the basin and nomination files for the designation of Lake Chad as a World Heritage site. The three-year project is financed by the African Development Bank to the amount of US$ 6,456,000 and is implemented via a multi-sectoral approach involving all UNESCO sectors at headquarters and in the field.

In his introductory remarks, the Nigerian Minister of Water Resources, H.E. Suleiman Adamu, praised the timeliness of the BIOPALT project in view of the major environmental challenges facing Lake Chad. He also expressed a wish that the project will contribute effectively to improving the living conditions of the riparian local communities, who face a situation of extreme poverty exacerbated by the drying up of the lake.

Mr Engida stressed that Lake Chad is at the forefront of the fight against climate change. He also emphasized the need to act quickly to break the cycle of ecological disasters, disruption to livelihoods and massive displacement of people. He noted ‘that only by working collectively can we overcome these challenges’. The project will mobilize all of UNESCO’s expertise, as demonstrated at the launch, which was attended by Ms Flavia Schlegel, Assistant Director-General for the Natural Sciences, Mr Edouard Matoko, Assistant Director-General for Africa, and the Directors of the UNESCO Regional Offices in Nigeria and Cameroon.

A panel discussion brought together representatives of different categories of stakeholders including decision-makers, experts and local communities, among others, reflecting the project’s inclusive approach. Ms Flavia Schlegel and Mr Boubakar Mana, the LCBC Technical Director, also participated in the panel. Ms Schlegel highlighted the contribution of the BIOPALT project to implementation of the United Nations 2030 Agenda for Sustainable Development, while Mr Mana highlighted the strategic challenges the project faces to strengthen sub-regional cooperation in the cross-border management of biodiversity and the heritage of Lake Chad.

The BIOPALT launch provided a platform to publicize the project to a wide audience from different parts of the basin and beyond and to demonstrate the enthusiasm and strong interest it incites. 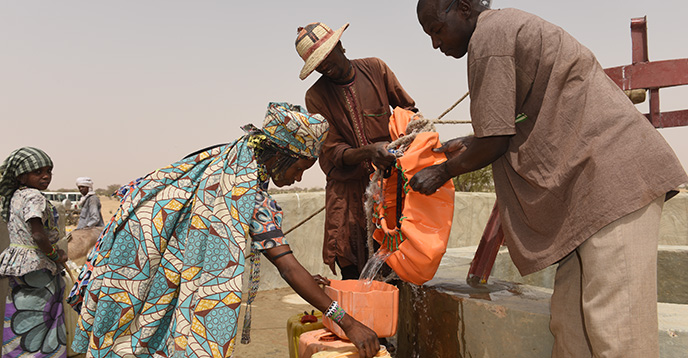 SDG 13 - Take urgent action to combat climate change and its impacts
SDG 15 - Protect, restore and promote sustainable use of terrestrial ecosystems, sustainably manage forests, combat desertification, and halt and reverse land degradation and halt biodiversity loss
SDG 6 - Ensure availability and sustainable management of water and sanitation for all
SDG 17 - Strengthen the means of implementation and revitalize the global partnership for sustainable development