The project “Young people, Weavers of Peace in the Cross-Border Regions of Gabon, Cameroon and Chad”, financed by the United Nations Peacebuilding Fund and implemented by UNESCO and UNODC, has established a network of 1,800 youth weavers of peace who will be actors in the consolidation of peace in the cross-border regions of the three countries and the prevention of instability linked to illicit trafficking.

This project takes place in the context of Central Africa which is globally a prey to vulnerability and security threats, including at its borders, due to recurrent crises and conflicts. The border regions between Gabon and Cameroon on the one hand and between Cameroon and Chad on the other, beyond the specificities of the areas, are experiencing factors of conflict and instability, including threats from armed groups, inter-communal conflicts, environmental crime and cross-border trafficking (drugs, arms) and other forms of crime. Young men and women are directly affected, facing unemployment, poverty and lack of prospects, and de facto exposed to recruitment by criminal or armed groups. In addition to all these factors of conflict and instability, the health and socio-economic impacts of the COVID-19 pandemic have been added to the list for several months.

The project therefore appears to be a blessing for youth in these target areas, in that it gives them the opportunity, as positive agents of change, to make a direct and lasting contribution to peacebuilding and development, with the backdrop of revitalizing their organizations and making them more resilient in the face of environmental, social, and economic shocks, especially in the target areas of Gabon, Cameroon, and Chad.

Better yet, by building their capacity in social entrepreneurship and providing support to 160 young entrepreneurs, these young people are de facto equipped and empowered economically, all of which helps to fight idleness and unemployment and above all helps to keep them from being influenced and recruited by armed and terrorist groups.

After the implementation phase of the project, it is now time for the actual implementation of the network, which will be completed with the training of young volunteers, men and women, aged between 18 and 35 years, voluntarily committed to serve their communities as weavers of peace, followed by training in entrepreneurship. Beyond peace and security, it is also a matter of promoting the Central African Early Warning Mechanism (MARAC) of the Economic Community of Central African States (ECCAS) and strengthening its operationalization through the involvement of civil society, in general, and youth and their organizations, in particular.

It is clear that this mechanism around these key actors will have a positive impact on social cohesion, living together and will strengthen the community fabric in the cross-border areas covered, and even beyond, and will contribute to the strengthening of cross-border cooperation between the three countries. The first actions of the trained and deployed weavers are eloquent and herald a better tomorrow for these young people and their communities. 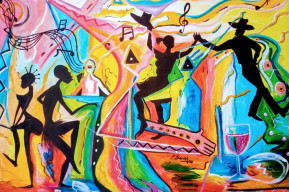